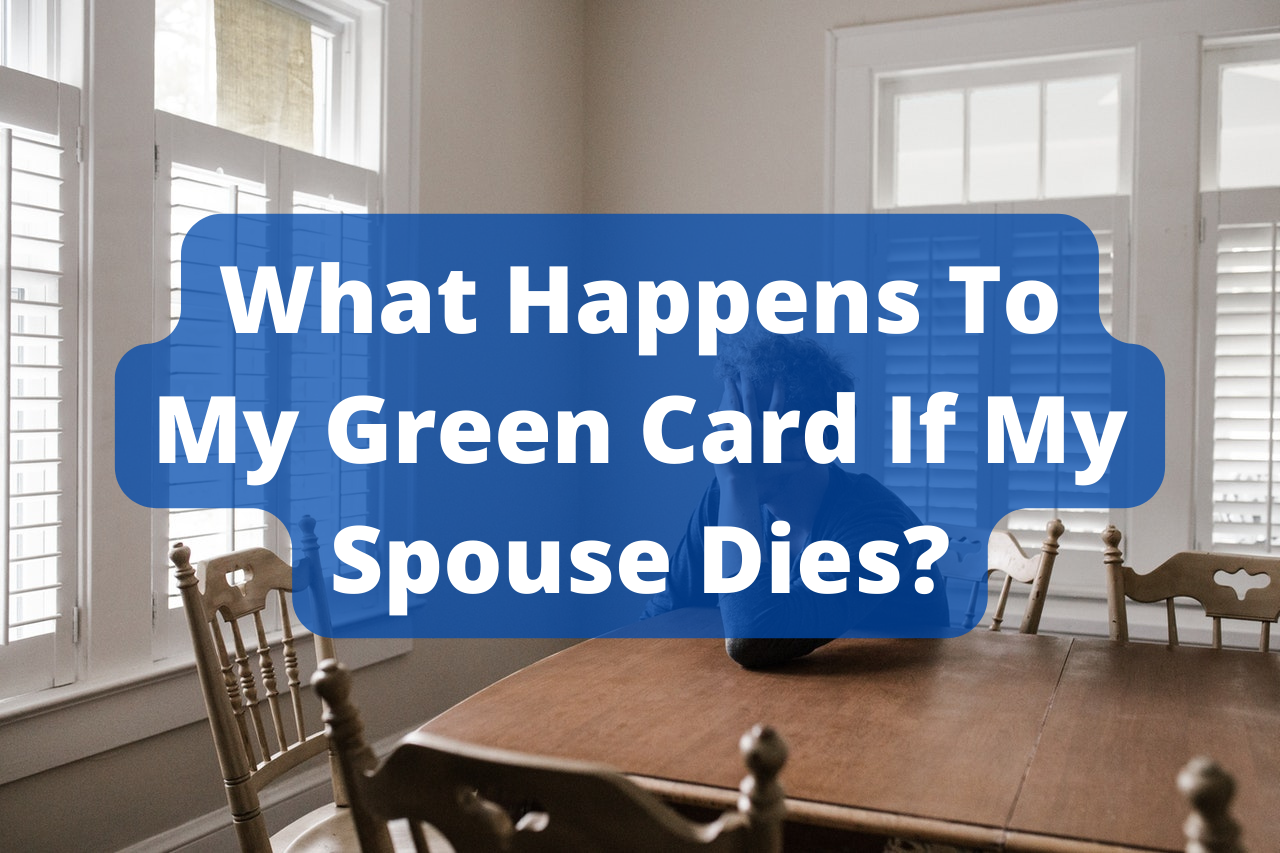 What Happens To My Green Card If My Spouse Dies? 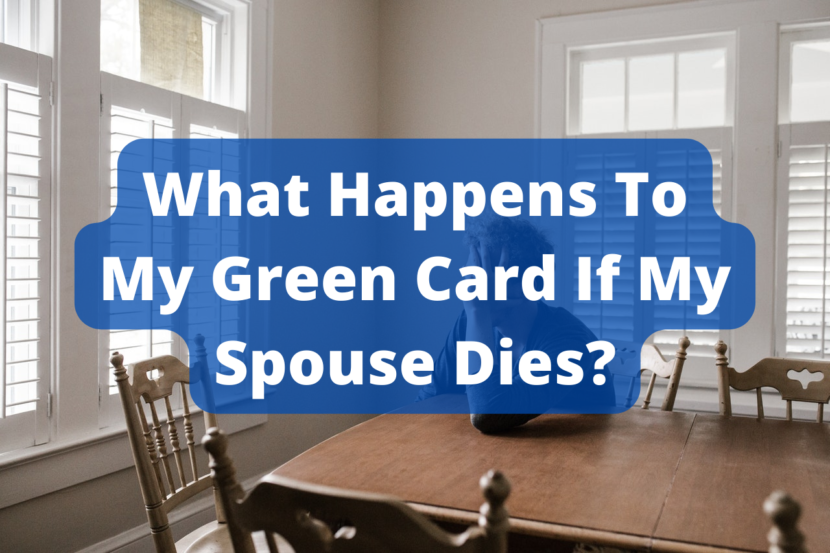 The green card process is very complicated and can be challenging if you have a spouse who passed away. In some cases, applying for and getting a green card may still be possible. There are provisions in United States immigration laws that allow widows and widowers to become permanent residents. Here are a couple of things you need to know about the green card process after the death of your U.S. citizen spouse.

Did you have questions about those imagination questions in Orange County and Irvine? At Brudner Law, our legal team is here to help. Schedule your appointment with our immigration attorneys today!

Eligibility Criteria to Apply for a Marriage-Based Green Card

A widow(er) of a U.S. citizen can obtain a marriage-based green card. The U.S. Citizenship and Immigration Services processes all immigration applications. At one time, USCIS had the “Widow’s Penalty” law, which requires the widow(er) to be married for at least two years (before the spouse passed away) to apply for a green card. However, the USCIS no longer has that requirement since it was unfair to the surviving spouse. As long as a widow(er) can meet the eligibility requirement for a green card, they can apply for the marriage-based card.

Widows will be eligible for a marriage-based green card if the following applies:

Any applicant deemed “inadmissible” to the United States because they pose a threat to national security or have a criminal history is not eligible.

Related: Do You Need an Attorney at Your Green Card Interview?

What is the Widow’s Penalty?

Before October 28, 2009, a widow(er) had to be married for more than two years before the U.S. citizen spouse passed away to apply for a green card. The requirement prevented individuals from participating in a “sham marriage” to obtain a green card. At one time, a non-citizen could marry a U.S. citizen to fast track their way to legal residence. After that, they would divorce.

However, there were inequalities in the law, and Congress removed the two-year requirement. Before the repeal of the provision, foreign spouses who became widowed were at risk of deportation. Many believed that the rules were unfair and penalized the remaining spouse. No matter when the U.S. spouse dies, the widow(er) can continue with the process for permanent residence. The spouse’s death will not affect the application whether the surviving spouse is living in or outside of the United States.

How Long Ago Did the Death Occur?

The time of the death of the United States spouse can affect the processing of a green card. The surviving spouses must file Form I-130 (the “Petition for Alien Relatives”) or Form I-360 (Petition for Amerasian, Widow(er), or Special Immigrant) within a span of two years after the time of the spouse’s death.

Some spouses often face many problems, such as spending too many days of “unlawful presence” in the United States. If the individual was waiting on an application approval when the U.S. spouse died, the surviving spouse would not acquire any more days of unlawful presence while waiting for the USCIS to rule on a case.

What To Do When There Is a Petition for a Foreign Relative In Progress?

No additional paperwork will be required if a U.S. spouse dies while there is a filed Form-I-130 (alien relative petition). With these cases, the form may be converted to Form I-360 (Petition for Amerasian, Widow(er), or Special Immigrant). The applicant can include any children under the age of 21 or unmarried children in the petition. The applicant must not be separated or divorced from the deceased spouse. Along with that, the surviving spouse cannot marry another individual since that will negate the application.

What Happens If There is No Petition for a Foreign Relative?

If the U.S. spouse dies before filing a petition to start the green card process, then the widow(er) can file a petition to obtain a green card. Like most green cards, there are a few requirements. Once again, the petitioner must not have been legally separated or divorced at the time of the spouse’s death. If the two spouses were living apart, then the widow(er) may be able to apply as long as a court order did not legally separate them. A legal separation requires a court order to decide alimony, property division, child support, visitation, and custody.

Time is essential in these cases as well. The applicant must file Form I-360 within two years of the U.S. spouse’s death. Also, the self-petitions should be filed before any remarriages. If the spouse marries another U.S. citizen, a petition cannot be filed based on the marriage to the spouse who passed away. In many cases, filing a green card application with the new spouse is easier and quicker than relying on an application for the deceased one.

What if an Individual Lives Outside or Within the United States?

If any widow(er) was living outside of the United States, the approved petition must be sent to the U.S. embassy or consulate of the country where the individual was living. In many cases, the regular steps of the foreign relative petition will follow as the case is assigned to an immigration officer.

If You Were Deported From the U.S.

For any widow(er) living outside of the United States due to deportation, and the deceased U.S. citizen spouse filed an I-130 petition that is pending, the surviving spouse can apply for a green card outside of the country. However, there are some requirements, such as

If the widow(er) applies for a green card outside of the United States, the survivor can go through consular processing at a local U.S. embassy or consulate. If the deceased U.S citizen spouse has already filed Form I-130 before their death, the application is converted into a Form I-360 petition. If the application has been approved, USCIS will send the application to the National Visa Center. In most cases, the surviving spouse must complete Form DA-260 (Online Immigrant Visa and Alien Registration Application). After completing the form, the NVC will forward the case to a local U.S. embassy or consulate. With that, the applicant will be content to schedule an in-person interview or biometrics appointment. Also, the surviving spouse must complete a medical examination with an USCIS-approved doctor.

What Happens After Submitting a Petition as a Widower of the U.S. Citizen?

If the surviving spouse meets all the qualifications, the individual will receive:

What’s the Filing Fee for a Widower’s Green Card?

Those who have already filed Form I-130 before the U.S. spouse’s death will not need to pay any additional fees. The cost to initial file the Form I-130 is $535. If the individual is filing Form I-130 after the death, the price is $435. All fees must be made by check or money order and must be payable to the U.S. Department of Homeland Security. Credit card payments are accepted but must be completed with Form G-1450 (Authorization for Credit Card Transactions).

Related: What Happens If My Green Card Expires?

Do I Need a Lawyer to Process a Permanent Residence in These Cases?

Dealing with the loss of a loved one and immigration procedures can be overwhelming. In these cases, speaking with qualified immigration lawyers is always recommended. These professionals in Orange County and Irvine can help you through the complicated immigration process. By becoming a widow(er), you will not lose your ability to become a United States citizen.

Even after the death of a United States spouse, the immigration process can continue with an application. However, depending on your specific case, there are still deadlines and procedures to follow. Immigration attorneys can help keep you on track with your green card application.

Do you have a question about your green card status as a widow(er)? At Brudner Law, we have an experienced team of immigration lawyers serving the Irvine and Orange County area. Schedule an appointment today!

← Marriage-Based Green Card: How To Apply In 2022 Motion To Reopen: Everything You Need To Know →